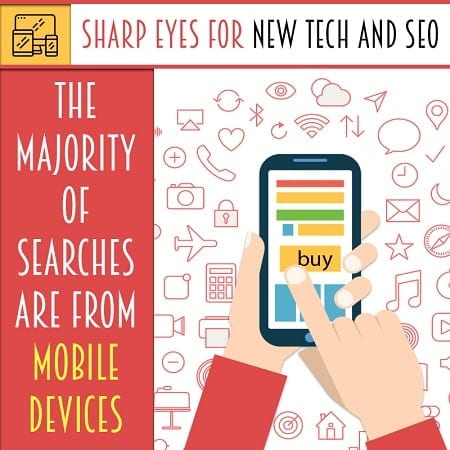 Every year technologies in computing improve. This introduces a variety of products and techniques that the SEO wary need look out for. Believe it or not, there are still webmasters and marketers who haven’t handled the growing mobile market. They just can’t or won’t see the value in using new technologies to leap into our futuristic competition. That being said, it’s best to look at the mindset and approaches you’ll need to make as new tech emerges.

For the SEO marketer or webmaster, the amount of study can be exhausting. They have to be on top of the latest technologies and techniques. One slip up could mean a plethora of problems down the line. It means adapting to new technologies and techniques even when one has just finished adapting to familiar ones. This can be frustrating and in some cases, catastrophic. For example the mobile adaptation problem.

Since the majority of people use mobile devices for computing, websites have to be modified to suit that venue. The majority of searches are from mobile devices and if your website can’t be easily accessed or read because of Mobile’s dimensions and parameters, people are likely to ditch your site and go elsewhere. In a case like this, you’re losing money. If you own hundreds of sites, it’s going to be like starting all over again. That is going to cost you lots of time and money.

So if you had caught onto the mobile rise and used available tools, many of which are free, you wouldn’t have so daunting a series of tasks ahead. This is why you need to realize even things like voice search is something you had better be ready for. The rise of Artificial Intelligence, and in the near future, quantum computers.

It’s not a stretch to say that overnight, everything you’ve got on the web will need to be modified or scrapped altogether. Developers are already practicing and inventing new technologies that could become major profit. It’s happened before and it will happen again. The key thing here is the function.

People use computers to communicate and acquire. To do both they need to search for things. At present we use search engines. Just think what would happen if search engines were no longer need and some new search process emerged? It would cause chaos throughout the world’s markets. If some new search algorithm included far more advanced AI than is used now. The search engine or search technology would know from habit what you will be searching for and do it for you.

Well, that’s just part of life. Things change for the better or worse. The difference here is that you have the power to adapt to those changes and use them to your advantage. It means staying up on the latest stuff as well as the theoretical. As harsh as competition on the web has proven, it’s not a position you would want to be in should you hesitate.